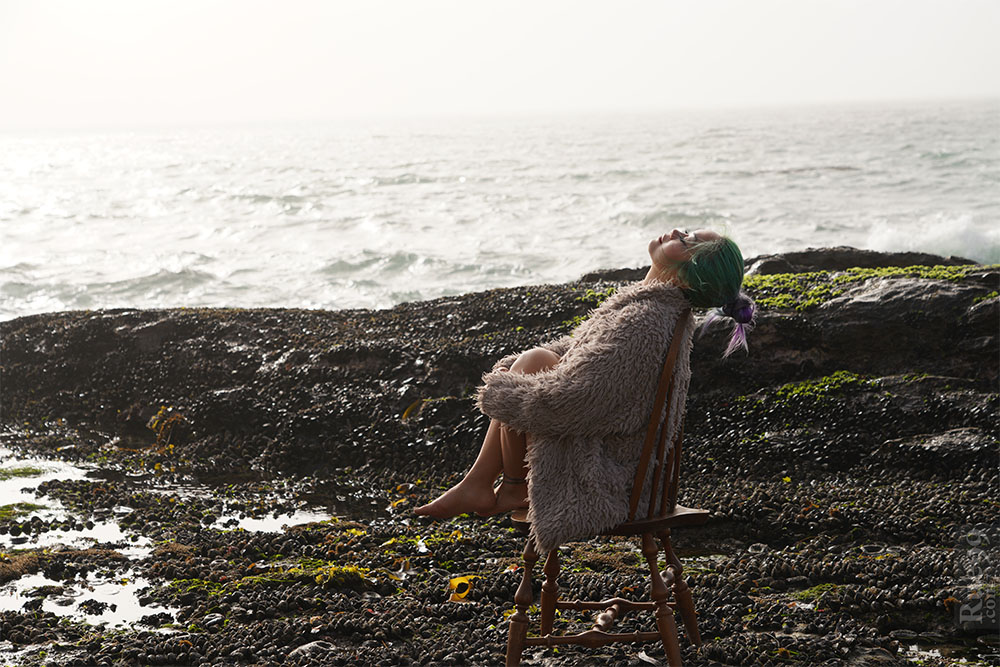 I was ready to shoot with Ivy using my brand new Sony A7R IV camera. It’s expensive and this would be its maiden shoot.

We lugged the chair and gear for a mile, as the temperature peaked at 70 degrees.

Ok, I’d skip concepts that would get her coat wet. 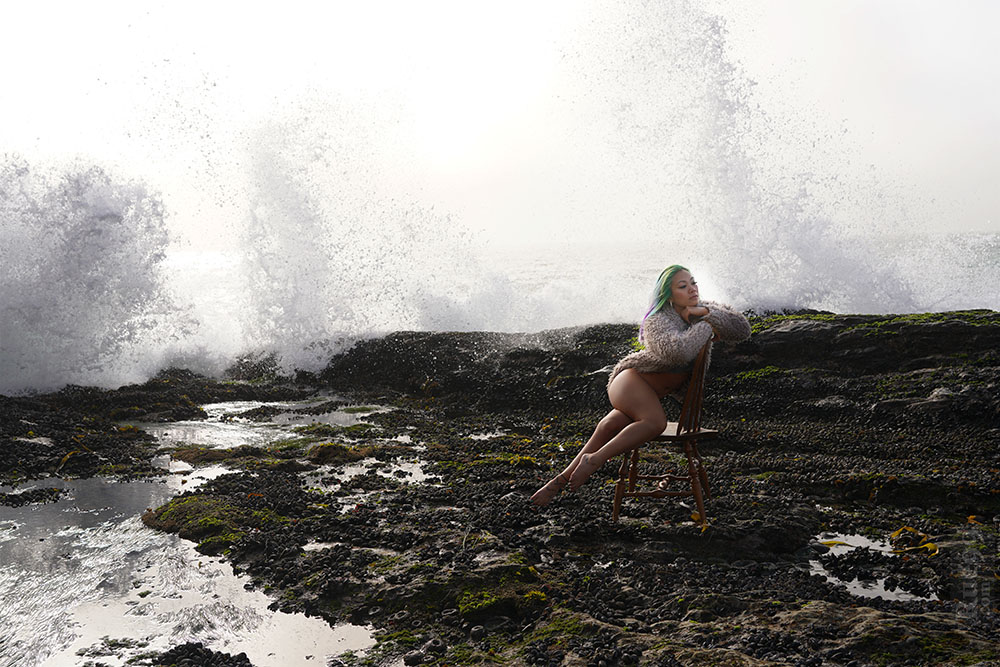 See how relaxed she looked? That’s because we were both naive and innocent.

Suddenly, a thunderous roar followed by a massive wall of water rose from the sea arching towards us. In her nice warm coat, she saw a shocked look on my face and probably wondered if her pose was off.

I instinctively turned away to shield my camera, but it happened too fast and the wave was too large, so boom! Both of us were drenched and a little seawater managed to hit the camera.

I’ve been using Canons for a long time, so I didn’t think much of it. The Canon has gone through a lot more abuse and bravely soldiered on without a peep.

Ivy was shivering and her coat was drenched, so I loaned her mine. Then I started getting cold. She empathized when I mentioned it was chilly.

Her exact words were, “You’re wearing clothes and I’m naked!!!!!!!!” She might have mentioned something about fingers or toes going numb, too.

It’s so hard to come back with a clever reply when models say things like that.

So this was the concept. Rope with a fashionish pose. The dark yet overblown lighting is not unlike an egg that’s overcooked inside and watery outside. A paradox left for minds greater than mine.

I wish this was an “art effect”, but the reality is the Sony was flashing a “Device is incompatible” message that covered most the screen. The seawater had worked its way into the hot shoe.

The camera got worse and would sometimes black out. The seawater was eating my camera alive from the inside, like a space parasite.

Pro tip: Don’t underestimate the importance of a working display on your camera.

Being an honest guy, I let Ivy know what was going on by updating her. “The pics look great! Fantastic pose! These shots are amazing!” I wasn’t lying if I had a thing for black screens or warning messages.

We did the best we could , and a lot of shots were pretty cool.

Cameras can be repaired or replaced, so I’m sure that will be fine. There’s no replacement for models like Ivy, and she is never going to let me forget how cold it was that day. I’ll need to be sensitive to that.

I wonder if she’d enjoy a shoot in the snow?